The Magnadrive Adjustable Speed Drive Coupling (ASD) was installed on the Hose Down Pump at South Walker Creek CHPP on the 4th October 2007. The installation included extending the motor mounting rails, installation of the actuator bracket, coupling and actuator, motor and pump axial and radial alignment and adjustment of the actuator linkage. Electrical works included installation of additional cables, pressure transducer, and configuration changes to the SCADA and PLC systems. The whole process was completed within a 12 hour scheduled maintenance day.

Prior to the installation of the new coupling, the 3/2 AH Warman slurry pump ran at a constant 2950 rpm with a pressure sustaining valve diverting excess water needs back to the clarified water tank. Motor load was consistently above 31kW. With the installation of the ASD coupling, the sustaining valve was removed and the pump speed is now controlled by the ASD coupling which in turn is controlled by water demand. As motor load is proportional to pump speed 3 (if pump speed is halved there is an eight fold reduction in power demand) any reduction in pump RPM is going to provide energy conservation.

A series of readings taken over the last two months has shown significantly lower energy consumption when compared with the recordings taken on the fixed speed pump in August 2006. Based on this data, it is expected that this pump will consume ~ 120MWh per annum less than it would have in 2006. Broadly speaking this could amount to a $12,000 per annum electricity cost saving, this will depend on energy & maximum demand tariff charges. 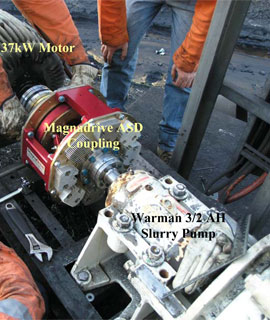